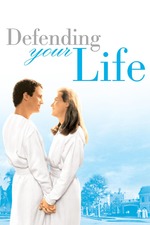 like Branson Reese mentions in his review here, really is something to realize just how many pieces of pop culture have borrowed from this; The Good Place absolutely builds from full structures set up here, and Pixar's upcoming Soul looks like it's taking the base idea here and transplanting it to an animated family film (fun!). though I sort of miss the acidity of Brooks' other films (we get glimpses here and there; the stand-up comedian scene is one of the cringiest moments in his filmography), the sentimentality he brings in its place clicks beautifully once you get in its rhythm, especially the ending which moved me to tears. the tone is more than upheld by Brooks' formalism here, tapping into a Tati-esque architectural whimsey and use of location, with stretching grasslands and colorful electric carts as vehicles. the final setpiece, where trams on colored lines enter tunnels in the side of a mountain, looks as though it could be either an elaborate soundstage creation or an ambitious and creative reutilization of a real-world space. the opening credits shot of Brooks being wheeled down an all-white hallway surrounded by a crowd of other recently deceased people in three-seat wheelchairs is a small wonder in itself. also, the notion of memories and life events being framed as filmic scenes, edited and polished, is quietly beautiful. loved this.