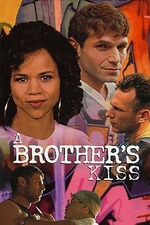 The 90’s seem to have invented a new movie format which I have dubbed the “urban drama.” Admittedly so, I have never been a big fan of this genre of movies, and A Brother’s Kiss has done nothing to improve my attitude in this arena. A Brother’s Kiss does present some big names in smaller, supporting roles to try to help booster its appeal. Names like Kathy Moriraity, Michael Rappaport, Marisa Tomei and Rosie Perez can’t help a film that begins in confusion, and unfolds too slowly to matter. Most of the film is told in flashback, and while I don’t know the names of either actor appearing in lead roles in this film, that is probably where I had the biggest problem. I applaud the director for taking a chance and using unknowns in the lead roles of two brothers raised in poverty, and on different paths to adulthood. Unfortunately, neither was able to draw me in to get me to care what happened next. Adding to that, a formula pretty common amongst the urban drama, the poverty, the sleazy, divorced mother, the drugs and guns. It was all just more of the same, and nothing I’ve enjoyed in the past, nor enjoyed much here.