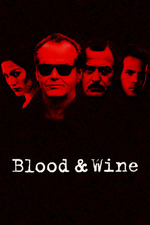 In the ever increasing and popular world of suspense drama, I’m afraid Blood and Wine adds nothing new to the mix. This film tells the story of two thieves, Jack Nicholson and Michael Caine, and their heist of a million-dollar diamond necklace from one of the wealthy landowners in south Florida. Stephen Dorff plays the stepson, accidentally involved in the robbery gone wrong, and in another great on-screen performance, Jennifer Lopez proves she is the next hot and up and coming actress. Unfortunately, the plot gets a little bogged down as it turns into a mix-up of events following each party’s attempt at deception, and trying to find and sell the million-dollar necklace. While the performances by Nicholson and Caine are good (as they usually tend to be), I found the plot to be pretty formula, with little suspense in the long run. It seems unfortunate that a film like this with a good cast, and a decent idea, has become too commonplace among all the other films of this genre. A new twist must be devised each time to give a simple story any kind of chance to stand out. Again, there was nothing terrible about this film, just nothing new.