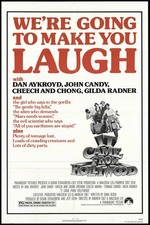 It Came from Hollywood

Not bad compilation of b-movie footage of horror, sci-fi, musical, and anti-drug films. Even if the host segments aren't the best all the time it's still amusing at some of the odd pairings of comedians on screen. Usually the segments are solo but sometimes the comedians are shown together. For instance, at the end of John Candy's tribute to Ed D. Wood, Jr., Dan Aykroyd pops up talking about remaking GLEN OR GLENDA with John Candy. At the end of the film, you see Gilda Radner denied a ride off the set by Aykroyd and Candy (they didn't have room on their motorcycle) but gets picked up by Cheech And Chong in an ice cream truck (a possible tease or reference to NICE DREAMS?). All in all, IT CAME FROM HOLLYWOOD is ok entertainment. It's not easily available on disc but it is on youtube. It's good to see the comedians paying tribute/affectionately ribbing on B-movies of the past, even if it isn't always successful.