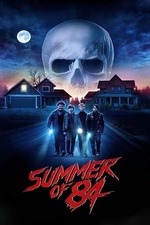 I wrestled with what to rate this because it's not great in execution, but the movie also makes some interesting choices that keep this from being just another nostalgia trip.

My biggest complaint is that the movie spends too much time trying to look the part. It tries too hard to look like an 80s movie, but it doesn't feel like one. Scenes that should feel natural and effortless, like kids riding a bike, seem forced and awkward. The soundtrack, though it certainly sounds of the time, is not memorable and feels shallow. It's as if the filmmakers read about the 80s in a book and tried to replicate that time period without having lived it themselves. I know that's not the case because their prior film, Turbo Kid, got everything right.

Where the movie shines for me is with how dark it gets in the end. The movie fools you into a happy ending only to deliver a much darker and grim ending than the first half of the film led you to believe. There's no twist, and the movie is fairly predictable, but there's enough variation to make familiar beats seem tense and scary, and that's what I appreciated the most.

On the Seventh Day