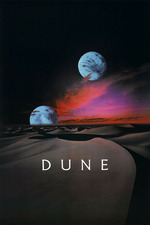 Look, here’s the thing… it isn’t a GOOD movie, but it’s sort of endlessly fascinating, even when it’s boring. It’s an absolute mess of a movie, I think (?), but I found myself completely enamored by it at many points!

I appreciated that Lynch waited until close to the end of the movie for the big worm reveal. Love how it’s in the trailer for the new 2021 adaptation! Very tense! Love how we learned nothing at all from JAWS.

I love my guy Kyle MacLahlan. He’s fun here, what with his boyish looks and charm. Sting is pretty fun, too lmao.

Lynch is such a weirdo hahahaha why the fuck does this exist?? Keep giggling thinking about how much money David tanked away for a studio. Thinking about criminal and sleazy studio execs killing themselves as this flopped LOL.

I’m sure the new Denis film will be *good* (I trust Denis and a lot of the cast, so I’m hopeful) or at least good enough, but honestly, studios have turned me off so much in how they go about making these movies (totally corporate w/ no artistic vision) and how they sell them. Even if this doesn’t work much at all and was mangled by the studio in an edit, I can at least appreciate that I can nearly see some of David Lynch’s vision within the movie. That’s more than I can say about most movies in 2021, unfortunately…

So yeah idk this movie is fucking weird and kind of bad but I enjoyed myself?? Think I’d get a real kick out of seeing it on a big screen. Weirdo mumble-jumble sci-fi stuff but fine enough. Hilarious hearing MacLachlan’s voice over continuously talking about salt. Decent production design, too, at least!