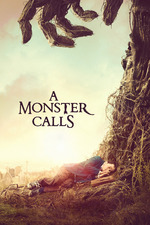 A Monster Calls is a story about a boy dealing with his mother's imminent death from Cancer. The film is tearjerker but also very genuine and heartfelt. Beautiful Animation and Excellent Performances, especially by the young Lewis MacDougall as the films lead Conor, are the strong points of this fantasy-laden drama. The main points of my criticism are some minor casting flaws, and the length of the piece.

Technically speaking, the film is gorgeous and at times purposefully drab for the sake of feeling. Highest-marks must be given for the creative use of animation in the fairy-tale stories told through-out the piece. From beginning to end the film really draws on great film techniques in order to propel the story. A great example of editing, lighting, animation, and effects to enhance a story.

The theme of this story is a dark and important one. Personally I feel that this is where the film does something very clever and obvious in retrospect. The story is for adults, but it's told from the perspective of a child which brings you into a world of anger, fear, and uncertainty; very appropriate given how one feels when experiencing a loved one who is slowly dying. The ending message is powerful, pointed and well-written. All the differing elements of the film come together for an amazing and hard truth to endure. I must say that there were a lot of tears during and after this film.

Entertainment wise is the only area where I would say the film was not as strong as maybe it could have been. The high point of the entertainment of the story is definitely the fairy-tales told by the Monster. However the biggest knock I have to give the film is in it's length, which because of the subject matter, drags your heart through a swamp of despair and leaves you a bit overly shaken in the end. Regarding the minor casting flaws, I think Sigourney Weaver's performance was masterful and gripping however her British accent was at times distracting. Liam Neeson adds just the right amount of weight that the Monster needs to be both terrifying and well-meaning.

Giving A Monster Calls 4.5 'Therapeutic Tree-monsters' in my book

A final note that I'd like to make regarding an element of the theme is Conor's relationship with his absent father. This is an element of the film that hit me very hard as a single-father who has tried so hard to maintain my relationship with my son post divorce. The father is charming and fun, but not all that he should be for his son. The feeling of abandonment that is felt with the interactions of Conor and his father are truly deep and reflect the type of Father I never want to be.

I'd recommend this for anyone over the age of 10. Maybe not for anyone who is dealing with some tough stuff. On the other hand, maybe it would be good to know that you're not the only one who feels the way Conor feels.

Writing this review stirred some feelings in me. When I get my son from school today, I'm going to give him a very big hug.