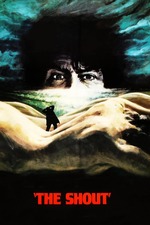 A truly absurd film, right down to the base concept: A man who spent 18 years mastering a shout that can kill people watches a cricket game while telling another man a story about how he seduced some guy's wife out in the countryside. In a way perhaps it's trying to state some message about humanity due to the fact that a guy so powerful, with the power to kill people with a single shout, just decides to use it to stroke his own ego by cuckolding other men, but the storyline is so surreal and nonsensical that I'm not even sure if I like it or not. It was fun to experience, for sure - the music and the cinematography was great, and I could tell significant time and effort was put into it, along with the sound design. But the disparity in volume of voices vs. sound effects was just frustrating. I constantly had to raise and lower the volume based on whether it was a converation or a "weird sound assault" moment.

The most disappointing aspect, however, is how out to lunch Tim Curry seems to be. He's hardly in any scenes to begin with, but I really wished he could have been the evil shout magician instead.

A Nightmare on Elm Street: The Dream Child