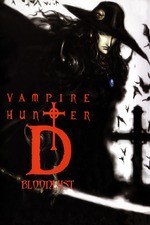 Urgh. Extremely beautiful art cursed with terrible pacing and one of the most boring scripts I've ever seen in an animated film.

Man I really hate it when you get to an installment of a series with a beloved character and they waste so much time trying to introduce you to side characters who all have the personality of a piece of cardboard (combined). Sadly the bounty hunters aside from D take up the majority of the first half, and it was really hard for me to resist pressing the fast forward button.

Then, we have the old man hand. It was fun whenever it spoke in the original, but in this one, I kept wishing it would just shut up. Every single scene with D is bookended by the old man hand's banter. Whose idea was this? Terrible.

Finally, we have the overall story. Whoever wrote the script thought the best idea was to focus the entire film around some random bounty hunter who falls in love with D. They even gave her FLASHBACK scenes! Are you kidding me? Not in my anime.

I just want to repeat, the art, backgrounds, and action scenes are really beautiful. But everything else was SO BAD that I had the hardest time enjoying it. In exchange for gorgeous visuals, they sucked out all the fun of the original.