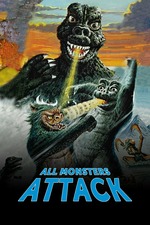 Ishiro Honda is a funny Person, I mean, would you believe, that the Guy who directed the first "Godzilla" is also responsible for THIS?
These Japanese...

The Movie is 100% Cheese and the German Sync doesn't makes it better, I laughed so much, you wouldn't believe!
It's all about a Kid with Bully Problems so he dreams his way straight to Monster Island to learn from the Big Master of rambling, GODZILLA!
His Son, Minilla, has the same Problem, so he watches Fight to Fight till he's ready to beat up some dumb Criminals who stole a lot of Money... oh, I forgot about that, sorry xD.

The Kid is insane! He took like every Drug existing, go kill it, FAST!
What an annoying Motherfucker!
And the Dude, who designed Minilla should be tortured in Prison for the Rest of his Life, what an ugly Piece of Crap... and it talks btw.!

Horrible but never boring, Cheese Overload with much Fights in it, that's always funny!
Not the Worst but pretty close xD.