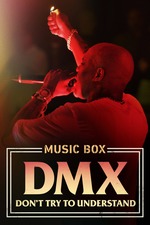 In Hip-Hop, there have been several artists to emerge into rockstar status, but between the tempered and more universally approachable artists, only a certain few were able to breach as themselves. But as it goes to show, one has to adapt to maintain momentum. DMX is a prime example of an artist whose high skyrocketed past the kind he gave himself in to his addictions. And DMX: Don’t Try To Understand, the newest film by HBO and The Ringer Films, goes and explores the different dimensions of DMX, and particularly the life of an aging artist who is thrown through the wringer as he reestablishes himself into the main stage. Christopher Frierson’s documentary delivers a glimpse of an artist with a legacy – an artist that emboldens every corner of his community and who we’ve taken for granted with ridicule and discernment as we toss them aside for a new toy. The documentary offers a distinct portrayal that offers a hybrid between documentary and diary of his life in 2019 without losing sight of its focus.

We all remember April 9th, 2021, as the day Hip-Hop lost an icon, a Ruff Ryder, and most importantly, a complex, multifaceted person in DMX. However, the DMX: Don’t Try To Understand doesn’t want to remind you of the abrupt stop that made the hip-hop community go into mourning. The mourning was accelerated when we were delivered his final album, Exodus – named after his young son. And instead of diving into the details and production of the music, we’re given a glimpse on DMX’s head-straight come back in 2019, which saw him touring for the 20th Anniversary of his debut album, It’s Dark And Hell Is Hot (1998), and follow-up Flesh of My Flesh, Blood of My Blood (also 1998). The late stage footage parallels a rapper at the end of the road while still riding the highs of his incredible success.

If you’re only expecting something about the music and his legacy within that realm, DMX: Don’t Try To Understand isn’t the documentary for you.* The music is there, and it masks us with positivity so that whatever comes next lands smoother than three gavel drops at once. Beyond a few performances at festivals, the film sometimes fails to reflect the magnitude of these performances, especially with crowd reactions. It quickly slides past his Woodstock 99 performance in the montage, amongst others. Unfortunately, the crowds in the modern footage just don’t resemble those of the early shows.

*After the deaths of Tupac and B.I.G, Hip-Hop was searching for that next guy to deliver the heat in a raw, esoteric fashion. In the documentary, there is a moment where DMX talks about aiming to have every song on the album drop as a single, and the authenticity behind that led to something different in Hip-Hop. It mirrored some of the singles of these artists, the ones that breached past conventionality like “Brenda’s Got A Baby” by Tupac or “Warning” by B.I.G.. DMX filled that void and kept it consistent till sometime after 2003.

DMX: Don’t Try to Understand. Dir. Christopher Frierson.
Christopher Frierson, whose background as a cinematographer in music-related projects, brings care to the visual style of DMX: Don’t Try To Understand, especially as it transitions between high points of DMX’s career. He uses these quick montages that deliver a flourish of content from famous music videos and shoutouts to film performances – bringing a keen focus on what hardcore fans want to see, like that early radio interview in his area before receiving the praise and momentous uproar of overnight success. The void he filled the following summer, after the death of The Notorious B.I.G, is shown to be some sort of fever dream, because the hip-hop community never held him up during lower moments, like when his 2012 album, Undisputed, failed to reach quality numbers for an artist of his status. Christopher Frierson knows DMX isn’t without his checkered history. When the montage offers up a darker side, it’s to express the cautionary tale it’s telling. It keeps its focus by having the narrative create its shape with intricate interviews that embolden the claims it makes. It asks us to split our view on the music and artist and view the aftermath that comes from a man who kept “Slippin’”.

DMX: Don’t Try To Understand understands the subject and respects the audience enough to tell a cohesive and linear tale about DMX trying to set himself back into the limelight. Circa 2019 was a hard time for DMX, battling the demons of his addiction while also overwhelmed with legal issues over tax fraud. His reflections on the 1998 hit, “Slippin’,” became synonymous with his ongoing struggle, but instead of staying down, each time he gets up and stands firm on two feet. There is something about DMX’s character, or rather person, that has allowed him to retain innate connectivity with everyday folk. The documentary gives us a lot of DMX on the streets of Yonkers, New York, connecting with current residents. There is a specific moment where DMX is at the community housing projects he grew up in, spreading motivational speeches, freestyles, and internalized connectivity. I couldn’t help but shed tears.

The main interviews are kept intimate and focused on the bigger picture: fatherhood, and legacy. We are shown moments with Xavier, his oldest son, the one who yearns for his father to better himself from his habits and contradictions. Xavier gives us his feelings under the limelight at the peak of DMX’s celebrity, as well as the ongoing issues stemming as he got older. During Xavier’s interview, Frierson shows us a clip from a Public-TV Show sit down where Xavier delivers DMX an ultimatum – DMX has to get better in treatment and focus on the family before it starts to trickle into a descent into madness. It goes beyond Xavier, as we split time between DMX feeling rejuvenated on stage and various intimate moments like those with Xavier and Exodus. It’s keen on reflecting the evolution of man as he tries to be a better father.

DMX: Don’t Try to Understand. Dir. Christopher Frierson.
Other Interviews are delivered stagnantly but implemented well. When DMX: Don’t Try To Understand takes a look at his legacy, the aforementioned crowd footage only delivers some justice. Before a performance in NYC, we shift from DMX and his thoughts, extolling the positives and negatives of success, especially for people of a lower social class who come from rough neighborhoods like him. So when the film transitions to a worker at the venue who talks about DMX’s music being a crux for him throughout his 13-Year stint in Jail, becomes reflective of his impact like the scenes at his old stomping grounds. Understanding where DMX is trying to rise from and how aspects of it haven’t escaped him just makes his downward spiral tragic. But others understand him more than people like me, a Colombian-Ecuadorian from New Jersey who grew up with his music along with others in the Metro area. And the documentary makes sure that the people his music helped, internally, were given the moment to leave a lasting impression.

Ending on a bittersweet note, the DMX: Don’t Try To Understand makes sure to round out the complexities of DMX, giving us what seems to be a final defining mark on his life. Along with an earlier scene, the ending also brings tears, but then it just ends. It gives us a positive outlook to see what seems to be DMX happy as he mends broken relationships, especially with his children.

DMX: Don’t Try To Understand delivers on impact. From the beginning, you’re in DMX’s world – the people you interact with and talk about him bring gravitas to the subject, allowing us to see a broken man whose success couldn’t help him overcome his demons. The ending felt a bit abrupt, and the short runtime may make some fans wish it was a little longer. But in the end, the film aims to deliver us a different side – one that allows us to forgive, remember, and continue listening to his music as his moment in the light was one for the ages.