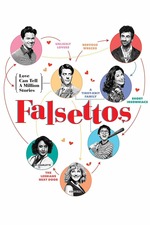 If I'm completely honest, this is not something that I would have sought out to watch on my own and if, for some reason, I had decided to watch it on my own, I likely would have turned it off within the first ten or twenty minutes. The opening is a little bit of a mess to me. None of the jokes hit and the child lead, Jason, has an annoying plot, even if it is an understandable one. I wasn't a huge fan of his singing either, though I feel bad saying that about a child on Broadway. The only song that really stood out to me in this first act was "I'm Breaking Down," largely due to Stephanie J. Block's stellar performance of it.

Fortunately, Act II (Falsettoland) is significantly better than the first and I ended up warming up to the characters and narrative a lot more than I had in the first half. The more serious tone worked well, and Tracie Thoms - and her character's girlfriend - made for nice additions to the cast.

There's nothing here that I love or that I feel goes above and beyond in terms of a musical, but it's a nice story with some solid performances. I wish more musicals had professional recordings like this one to make them more accessible to general audiences.

As a note unrelated to this recording/film itself - I'm worried about this eventually getting taken off of Letterboxd even though there's no reason for it to be removed. The entry doesn't show up in list searches nor does the poster appear on many (if any) of the actors' pages, even when it's the only thing on lb they acted in. Very strange.