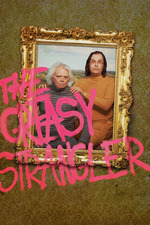 The first hour of this is so wildly, ridiculously funny and disgusting that I found myself starting to think of the best way to tell people that it was my new favourite film of the year without outing myself as a ridiculous idiot. For some reason I kind of expected this to have a Troma-esque vibe but it doesn't at all - if anything the comedic stylings are more like a cross between Napoleon Dynamite and Trailer Park Boys, but with 8,000% more gratuitous nudity than either, or than pretty much anything else, really. Throw in the fact that one of the main characters looks like something from one of Vic Reeves' dreams and you have... The Greasy Strangler.

Somewhere in the last act, this crosses a line and gets a little bit TOO cruel towards one of its characters for my liking, but it's such a bizarre and entertaining experience that I can't hold too much against it - in fact, it's probably for the best that this did eventually offend me a little, as otherwise I'd be fearing for my own soul.

Planet of the Vampires