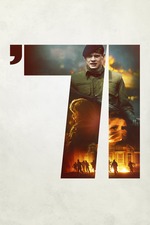 In 1971 I was living on the fringes of Derry's Bogside. On several occasions my home was 'collateral damage' in a number of bombings and I remember lying on the floor of my bedroom in case I might fall victim to a stray bullet from one of the gun-battles raging outside. I drank in pubs that would be bombed in time and I was on the march on Bloody Sunday. Things were bad in Derry in 1971 but they were a lot worse in Belfast which is where and when Yann Demange's terrific movie "'71" is set.
Maybe it's because I had first-hand experience but I've never really taken to films about 'the Troubles'. Irish film-makers have usually shied away from the subject, (a rare good exception being Jim Sheridan's "In the Name of the Father" and that was set mostly in England), leaving it up to the English and the Americans to tackle them, mostly ineptly, (exceptions again being Alan Clarke's made-for-television film "Elephant" and Steve McQueen's "Hunger"), so my expectations of "'71" were far from high, yet I believe this will be the film about the Northern Ireland 'Troubles' by which all others will be judged.
Firstly nothing happens on screen that seems far-fetched or exaggerated, (and here is a film that doesn't pull its punches in showing the collusion between the British Government and paramilitaries on both sides). It's a film that could never have been made in the seventies and even 20 years ago it would have been banned here in Northern Ireland. Politically, it's dynamite but it's as a nail-biting, nerve-shredding thriller that it really makes its mark.
In may respects it's a very minimalist work, taking place almost entirely over the course of one night and is really made up of two lengthy set-pieces. It's about Private Hook, (a superb Jack O'Connell), a young British solider who, on his first day of active service in Belfast, is separated from his platoon and forced to go on the run in a totally alien landscape where he is seen as 'the enemy' to be hunted down and killed. We've seen this story before. In "Odd Man Out" James Mason was the IRA man on the run in an equally treacherous Belfast but as they say, it's a tale as old as time. Outstanding American examples have included "Deliverance" and "Southern Comfort", albeit in very different settings, but few have packed the punch of "'71"; this is a terrifyingly tense thriller.
It's also the feature debut of Yann Demange who handles the material with all the assurance of a Paul Greengrass. He shoots it as if it were a newsreel, using mostly a hand-held camera, (the DoP is Tat Radcliffe), putting the audience in the centre of things. For once, all the performances are superb. In the past actors playing either Ulstermen or the occupying forces have often been reduced to nothing more than mouth-pieces; not here. Everyone on screen is utterly believable. This is one of the finest films you will see all year.

The Way He Looks