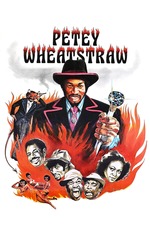 Hooptober: Legend of the 7 Golden Mozzies.

Chapter the First: Films with a black director or predominantly black cast or lead (first of two)

Thank God it's HoopTober - by Gar, I needed this! And what a moment to watch my first Rudy Ray Moore movie - the weirdest curtain raiser to the spooky season imaginable.

Petey Wheatstraw is what happens when you just grab a couple of cameras and a bunch of people and then just film whatever the fuck jumps into your head. So you get a slapstick childbirth scene where the baby is a foul-mouthed 9-year-old, some random stand-up comedy by Moore which consists of him pointing out how big the tits and asses of his audience are and then telling them to fuck off if they don't like it, you get a couple of gangsters shooting a young kid, then there's some more comedy, Petey walking down the street magically making fat women skinny and shitty cars slick and then it all went into a bit of a blur for me until Satan showed up with his devils (i.e. guys in leotards) to try and defeat Petey.

It wears its amateurishness proudly on its sleeve to the point where it actually reminded me quite a lot of John Waters' early films. It doesn't go out of its way to be as gross as those do, but it doesn't feel like it's pulling any punches either. And I have to say, I liked this a lot better than those movies - there's always something happening, whether you understand why or not (usually not), and it's actually pretty entertaining. The red velour interior furnishings alone are enough to keep you visually stimulated.

Is it even a horror movie? Who the hell knows, I can't categorise this at all. Maybe Rudy Ray Moore movies are a genre all on their own!