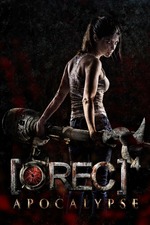 Hooptober: Legend of the 7 Golden Mozzies.

Day 16: Unwatched film starting with the same letter as your first name.

It's official. The REC series is one of my favourite horror franchises. The original REC is one of the finest found footage horror films - the final few scenes of that movie legitimately scared the pants off of me. I wasn't such a big fan of REC2, but then we saw original creators Paco Plaza and Jaume Belaguero split off to each do their own sequel, and I loved where they took this series.

Plaza's REC3: Genesis was a wonderful return to form for the series, ditching the found footage format to deliver a riotous horror comedy of Raimi-esque proportions which moved the zombie outbreak to a huge wedding. And now I have finally got around to Belaguero's effort, REC4: Apocalypse - which is basically REC on a big boat.

The first half of the film is perhaps a little predictable. We start by slightly retconning the end of the first film, or so it seems, with Angela Vidal being somehow rescued from the building where we last saw her falling prey to... something. She wakes up on a boat which turns out to be a floating quarantine of some kind. We even get an old lady on the boat who is supposedly the only survivor of the wedding in REC3. Ho hum, well obviously the virus is going to get loose on the confines of this cargo ship, yawn, how predictable.

Well, yes and no. Yes of course we get zombies again, but there's YET ANOTHER twist to the story. Some will roll their eyes, wondering if this series will ever make it's mind up about what exactly the nature of this zombie threat really is, but I guess I'm not the eye-rolling kind. I took a lot of joy from this sudden jolt of the unexpected and I think the second half of this movie is just massive fun.

Belaguero has made a heap of horror movies, most of which are totally unknown outside his native Spain. I have checked out a few - the quality varies, but top class cinematography always seems to be a feature. The way he captures the action in the claustrophobic confines of this ship is really excellent. We also get a cast of really appealing and interesting characters from the soldiers guarding the ship, the scientists trying to develop a retroviral and then some colourful characters like the tough old engineer, the lackadaisical Filipino cook and Nic the IT guy. Instead of REC3's chainsaw wielding bride, we get pudgy little Nic wielding an outboard motor, mowing down zombies and virus-riddled monkeys alike.

Conventional wisdom seems to be that REC is a classic but that the sequels bring diminishing returns, but I think they're totally under-rated. This was a complete hoot.