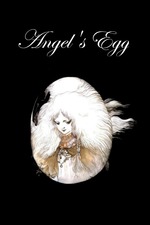 "Suffering Is Good!" The Priest proclaimed. "Submit yourself to him and he will embrace you. Suffering is your path. The divine and the human meet here, and all your pain will be lost with a tear under the light. Suffering, Is Good."

Angel's Egg, although my first of Oshii, seems to me, as his most personal work. Prior to the production of the film, he lost his faith in Christianity. I don't know if this means that he lost his faith in God altogether. But It's safe to say that Angel's Egg is a letter through imagery. The three main characters are an attempt to work through a nihilistic dilemma, where Faith and Hope have parted their ways.

A hypnotic progression through surreal imagery. This is the best I can do to explain what happens in the film without giving much away. What I can talk about freely is the experience of the film, the emotions that the film evokes without much dialogue. The absence of dialogue also paves the way for a beautiful mystical score to take the foreground, and add to the experience. Angel's Egg, doesn't have any single interpretation. What it does have although, I think, are vast contradictions within interpretations. There is a sense of despair in the film, but I don't deem it nihilistic. I would rather call it the birth of hope.

"But God Is Dead! And We Have Killed Him!" Said Nietzsche. "It's a horrendous tragedy. There no sense to our suffering. The god can't embrace us. Life has no meaning. We must go through it, as frightening and lonely as that may be. This is the new dawn, where once it realizes that in all it's glory, that there is nothing but emptiness to it, faith parts it's ways with hope. And in it's wake, it creates all the more hope. This is the New Dawn."