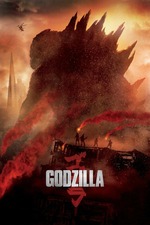 "ooh I do like a summer monster movie blockbuster!"

Lets talk Big lizards, lets talk about the king of em all, Godzilla!

First off I will get the comparisons out of the way.

Unlike, Pacific Rim, which I hated, was disappointed in, with its puerile story, abysmal acting and dialogue that had been written by retarded chimps. Godzilla on all said accounts, is a better movie.

it didn't have the wow factor I was hoping for, and Godzilla didn't really have that much screen time in this 2 hour long film. But it was atmospheric, and Godzilla himself was a superb piece of CGI animation.

Comparison with the Other Godzilla movie. It had similarities,
1: they were both called, Godzilla,
2:they had a big lizard in them.
3: nuclear energy was mentioned.
4: there were lots of military running around pointing big guns at him.
This version, however had a more serious note to it, unlike the tongue firmly in the cheek of the other one.
it was also more faithful to the original Japanese movies, with both the look of Godzilla, his personality (after all he is the hero and guardian of the planet) and of course his glowing spines and devastating radioactive breath attack.

Not so much a monster disaster movie, more of a monster slam-down.

the story! well, do we even have to go there? ok.

Millions of years ago when the Earth was Radioactive, there roamed huge super beasts, which fed on the radioactivity. As radioactive levels fell, the beasts burrowed deep beneath the Earth and fell into hibernation, until Man started messing about with nuclear materials, waking up a couple of giant cockroach monsters. Enter, super alpha predator, Godzilla, who eats these bad bugs for breakfast.

No doubt we will be seeing Godzilla 2 and maybe 3 etc etc, depending on the box office success or failure of this movie.

go see it, make up your own mind!