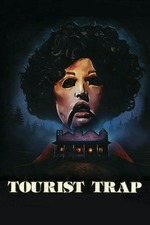 Just watched this all the way through for the first time as part of the Joe Bob Briggs "Last Drive-In" show on Shudder and gotta tell you, it was a bit underwhelming. Let me get to the good stuff first.

PROS:
-Chuck Connors is the highlight of the film, he manages to take a pretty lame & one note character and give a little depth to him. The scene where we discover what happened in his past felt like a different film for a minute. I also love how he gave off that creepy voice.
-The death scene of that one girl on the table was very effective. I actually had a moment where I could imagine how the character is suffering, the actress did great too with her body movements, score & his narration of what was happening all came together very well.
-The look of the mannequins are great and a tad creepy in certain angles.
-The atmosphere is quite good.
-Tanya Roberts

CONS:
-The acting is HORRIBLE. I don't know if it was the direction given or just the actors,but aside from Chuck Connors & that one character that dies, everyone else felt flat & over the top.
-The score has its moments (as I mentioned during that one death scene) but the hokey (as Joe Bob Briggs calls it) just felt really out of place.
-The death scenes are terrible, outside of the one I mentioned above, the rest were extremely dumb. Though the Tanya Roberts one does come close to being a bit effective.
-Now its often said that keeping the killer a mystery is important it can be a bad idea to just not mention how the hell things happen. Like the telekinesis. I did read that Charles Band requested that element in there and it wasn't there originally, but apparently an explanation wasn't written either.

Will I watch this film again? Yes, its not the worse and as I said there are a few elements but there's quite a few errors here.