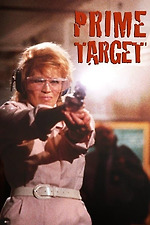 "What are you, Dirty Harriet?"

Detective Mulcahaney (the ever graceful Angie Dickinson who is at once both too good for this material and not up to the challenge of delivering a more interestingly wild-eyed, angry performance) deals with a Harvey Weinsteinian encounter early on when her boss invites her to a private professional meeting and casually half-disrobes in front of her. Her investigation into the murders of other female cops leads her to review news footage of an anti-affirmative action protest led by angry dudes shouting,
"Women go,
Men stay;
we will fight
the ERA." (Equal Rights Amendment)

Not saying this ought be revered as a new overlooked entry in some Feminist Films Canon or whatever, but seeing this through 2018 eyes is something. Mulcahaney diligently does all the procedural work necessary to solve The Big Case and displays the cleverly heightened intuition you only expect to exist in someone who on The Wire might be described as 'natural poe-lease,' but she has to deal with a lot of discriminatory bullshit.

It is also true that she wears a pair of flamboyantly white high heels to a cop's funeral, so maybe her disgruntled, distrusting colleagues have reason to dislike her.

Also, there's this exchange:
"I just wanna know how a policewoman could afford that apartment."
"Maybe she invested wisely, huh? Maybe she had a rich boyfriend."
"Yeah, Donald Trump."

There's no escaping that fucker. At this point the mention of that name is more repulsive and sobering to me than the gratuitous cross-river shots of the NYC skyline around the 81 minute mark and 94 minute mark in which you can see the WTC towers.

Also worth noting is that this movie includes the rare 'reverse-hand-over-your-badge-and-gun' scene. Our protagonist disputes the commissioner/IA's request that she wear a wire to help rat out some bad cops, and she hands over her gun/badge to quit in protest, but then the Stupid Chief catches up with her in the hallway and concedes that she need not wear a wire and convinces her to stay on the job by handing back her badge/gun. A refreshing topsy-turvy moment to behold in my favorite cinema genre. I'll watch and enjoy a thousand more of these formulaic crooked-cop mysteries, and most of them will use the same elements and templates as, like, SERPICO/INFERNAL AFFAIRS/Miami Vice and won't be as good, but I do appreciate when they dare to add an unexpected wrinkle to the formula.