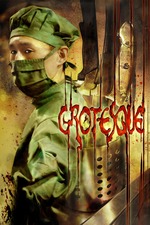 So this was...a lot. Honestly I expected to be indifferent to this and complain about the ending or something, but that isn’t the case. The experience of watching this is a rare one where I’m filled with genuine fear over what’ll happen next. No eagerness to see escalation, no morbid curiosity of how wild it’ll get, just fear of what’s gonna get thrown at me next. That’s a special feeling, because it’s a unique one to me. That unique experience gets this film a lot of points from me and a really appreciate it.

A lot of what the antagonist says feels like a message to the viewer. I won’t spoil but towards the end he’s yelling at a guy and it felt like him talking specifically to me and responding to my feelings and thoughts in the moment. This movie is almost meta, without actually being meta. I won’t go further on that because this isn’t a sub genre I’m particularly familiar with and as such I don’t have the knowledge to comment on the greater tropes and common elements and whatnot.

Now I’d like to comment on the gore. At a point I had to pause and prepare myself for the next thing. I mentioned earlier I had an almost constant fear of what would happen next. That said, I kinda wish this had gone harder. Unfortunately I think resources were too limited to make certain things look as good as they could have, but there’s no excuse for the sound effects. Countless moments are diluted to varying degrees by this squishy sound effect that wouldn’t be out of place in an over the top commercial for a squishy kids’ toy. Could I handle a slightly more hardcore version of this? No clue. At the very least I wish it existed to decide for myself.

Ultimately I’m really glad I watched this. As I keep saying, it was a very unique viewing experience that’ll probably stick with me and I respect it a ton for managing that