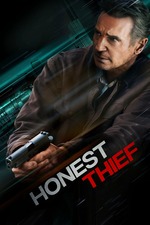 Honest Thief takes a really cool premise and pretty much does nothing interesting with it. It's all so basic and predictable that it feels like they wrote a first draft of the screenplay, thought it looked much more clever than it actually was, and then just ran with it.

I swear, there were so many scenes that the writers and director must have thought were extremely touching and powerful, but most were cheesy at best and eye-rolling at worst.

By far the best part of the film is Liam Neeson. He's always fun to watch and when he's giving his five minute exposition dump, he sounds so darn cool doing it. There are also a couple of scenes towards the beginning of the film that showed potential and made me believe I was in for something cool. That didn't last too long though because as it progressed, it became abundantly clear that it wasn't going anywhere all that interesting.

Most of the film is underwhelming, the characters are as basic as they come, the writing is pretentious, and the direction is extremely bland. For a character who's supposed to be very precise, he's actually very sloppy, and I think that in a nutshell represents how unpolished this script and this movie really is.