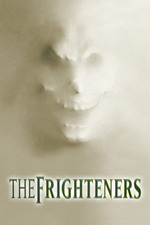 The Frighteners is fascinating to watch with the context that it led to the creation of what is, in my opinion, the greatest film of all time. Peter Jackson's ability to keep this film's budget small, despite it's heavy use of visual effects, is what led to New Line Cinema greenlighting The Lord of the Rings Trilogy with him as the director.

That makes it so much odder that this film is, well, not very good. There is a very good film buried deep inside, but the execution is too messy to find said very good film. In many ways there are two movies fighting each other: a goofy comedy about a fraud exorcising hauntings that he causes with his ghost friends, and a supernatural mystery about a serial killer ghost.

The film really suffers in its first act, where the goofiness is at it's peak and the story doesn't seem to be coming into focus. Thankfully, as the film goes on, it hones in more on the supernatural murder mystery, which is by far the stronger storyline.

Oh, and did I mention Jeffrey Combs' FBI Agent character? He comes in during the second act and chews more scenery than Jim Carrey would ever hope for. He has barely any influence on the main plot, and is somehow also the most memorable part of the film.

This film is a mess. There are some effectively creepy scenes, and the climax is quite good, but it takes too long to find a tone and contains just a bit too many non-sequiturs to fully recommend.