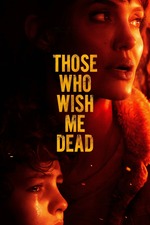 I was excited for this film when I heard it was a throwback to 90s mid-budget action thrillers, a genre I really like. While watching this film I suddenly remembered that, despite my fondness for the genre, most of those movies sucked.

Those Who Wish Me Dead has an intriguing premise, a firefighter must save a child from two hitmen while outrunning a forest fire. Unfortunately, that synopsis barely describes the film. It eventually gets there in the third act, but first it meanders about for an hour following too many characters mucking about. As a result, though she's ostensibly the protagonist, Jolie's character feels like a supporting role in the film.

Far too much of the screen time is spent with Aiden Gillen's hitman and Jon Bernthal's sheriff. There are long sequences of terrible dialogue that could better be spent with the characters who matter more to the story. (I don't mention Nicholas Hoult as Gillen's sidekick or Medina Senghore as Bernthal's wife, as they are better acted and more interesting than their counterparts.

Overall, this film's poor time management leaves the character relationships feeling unearned. Jolie and the boy, the primary relationship of the film, are unable to sell their connection as they barely spend time with each other. The action, once it finally gets going, is also underwhelming.

There are a few good films buried within Those Who Wish Me Dead, but the filmmakers do everything in their power to avoid those good films. What is left is an empty and head scratching experience. A throwback to a different time, but one that fails to throw back to the better examples.