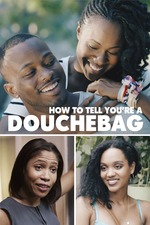 Ray Livingston is a blogger (Occasionally Dating Black Women) and plays the field -- dating multiple women at once. He confronts a woman on the street, and she gives him the dressing down of his life, calling him out as a douchebag.

His friend Jake tells him the woman he just accosted is none other than Rochelle Marseilles, a famous writer for Mahogany. Ray tries to apologize, but puts his foot in his mouth yet again as he blogs while drunk. But the sparks have been flying between the two. Rochelle agrees to go out with him, and they have a wonderful weekend together.

Then Rochelle has brunch with her girlfriends and meets Yasmin, who had been dating Ray. Ray doesn't understand when Rochelle doesn't want to see him again -- why didn't she feel the magic he did?

Charles Brice is fantastic as Ray -- he's a jerk, but a very charming one! Dewanda Wise is an arrogant and flawed Rochelle -- she may seem to have her act together, but the relationship misfire is not all on Ray. The highlight of the film is the supporting players, Jenna Williams as Yasmin, Alexander Mulzac as Rochelle's boyfriend Paul, and especially William Jackson Harper as Ray's friend Jake.