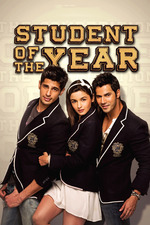 Student of the Year

It was curiosity about Varun Dhawan, who has been cast as a lead in the Bollywood remake of Fault in Our Stars (with Deepika), that led me to check out this Karan Johar film. SOTY is set at a junior college where the gay dean (Rishi Kapoor) has an annual contest for, you guessed it, the Student of the Year to win a scholarship to an international college. And this contest is not just academic, there is a triathlon, a scavenger hunt AND a dance contest. The film begins with the group of former students gathering at the hospital bedside of the dying dean, and then flashes back 10 years in the past.

Evidently, it was quite notable that Karan Johar debuted several young actors and actresses in this film, rather than matching one unknown with an established actor/actress. Of the students, only the college vamp is played by a familiar face, Sana Saeed albeit when she was a child actress in Kuch Kuch Hota Hai as little Anjuli.

This film reminds me of John Hughes films of the 80's with the rich kids pitted against the scholarship kids from the Indian equivalent to the wrong side of the tracks. Or Gossip Girl or The O.C., etc. Karan Johar is just SO good at setting up melodramatic love triangles. Varun is the rich kid and Sidharth Molhotra the scholarship kid, and Alia Bhatt plays the rich girl that they both love. I had not seen any films with these three young new actors, and while all are good, Sidharth Molhotra's performance is the standout. (Seems like all the Indian awards agreed, nominating him for best male debut.) Very Ben MacKenzie (a la O.C.) silently pining over the rich girl while trying to act all tough.

Also notable was a supporting role by Kayoze Irani who gets a big "Go to Hell Dean" speech near the end, who it turns out is Boman Irani's son. Huh, fancy that, a child of a Bollywood star getting a role in a KJo film. ;) Boman, Kajol and Farah Khan all have cameo appearances.

Fairly predicable plot with the Bollywood emphasis more on the bromance of the two male leads than on the romance of Sidharth and Alia's characters. Karan Johar is masterful at taking you on that emotional journey, and I tip my hat to him. Very entertaining and enjoyable.