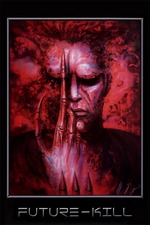 A frat has to make up for a couple of pranks they pulled on elder members, so they're ordered to kidnap (and immediately release) the leader of a nuclear power protest group. Said protest group operate in city slums and don 80s-new-wave eye makeup to resemble mutants of nuclear fallout. The second in command of the protest group, a big dude that looks straight out of MAD MAX (named SPLATTER, and played by Edwin Neal, the hitchhiker from TEXAS CHAINSAW MASSACRE), goes against the peaceful protest ideas of the group by being a psychotic murderer. When he sees the frat show up to play their prank, he nabs the opportunity to kill the leader of his own group and tells everyone that it was them, spurring a city-wide hunt for the frat dudes that lasts the remainder of the movie.

It's amazing how much story is actually in this, considering how slow it is. The best thing anybody is gonna get out of this is 80'S AESTHETIC™. However jaded I am about the whole idea of that and how overblown it is lately, the costumes and makeup are pretty rad. Splatter has a mohawk and wears a weird metal half-mask-half shoulder pad thing and has metal claws and retractable arm blades. He also has some kind of apparatus that works similarly to Bane's super buff guy juice. There are tons of random punks and weirdos everywhere in this movie. I'm reminded of stuff like VICIOUS LIPS and BEASTIES.

But plot-wise, this is very similar to THE WARRIORS. A group of dudes trying to get out of the city on foot after dark when everyone thinks they killed a beloved high profile figure. The music is similar too. Tons of synthy dramatic stuff that always pipes up when the guys get spotted and have to bolt.

There's plenty of substance to this, but it ultimately drags due to a lack of interesting thematic and action beats. It seems like it's always the dudes running or fighting, with neither being done in a really interesting way. Most of this takes place at night, and it's often difficult to tell what's going on anyway. Despite all that stuff though, it's still a worthwhile watch for its good elements.