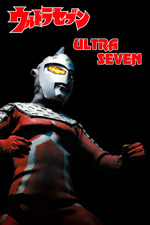 if I was to only show one series to someone to introduce them to the Ultraman franchise, without a doubt it would be Ultraseven. with effects rivalling that of its predecessor and even many of its immediate successors, Ultraseven makes the strongest mark on the Ultra series ever, with striking imagery, fantastic cinematography and stories featuring strong social commentary, disguised as a science fiction action series.

Many of the best episodes are easily the ones directed by the legendary Akio Jissoji, as his iconic use of lighting and shadows is most prevalent here, Like I said, many of the stories are social commentary based within science fiction. Such as the episode with Alien Metron, most well known for its iconic sunset battle features a story of human trust in each other, with the alien poisoning cigarettes with drugs that cause humans to attack one another. The episode ending with the narrator telling the audience that this is a story of the future because we still do not trust each other enough for aliens to pray on that.
Another episode has undertones of mutually assured destruction and the nature of humanity, with our heroes creating a superweapon, which creates a monster, leading them to plan to create an even stronger weapon, creating a deadly cycle.
Those are just two examples of what Ultraseven offers in terms of memorable episodes though there are many more.

The characters are not as memorable as those from the original series, is a bit more realistic to fit Ultrasevens tone. Our main character, Dan, AKA Ultraseven is a bit blander than Hiyata though our female lead Ann is a much better character than Fuji.