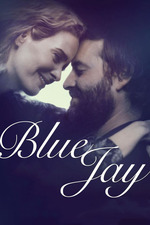 First and foremost, Blue Jay does not need to exist in a post-Before Sunset world, because obviously it's never going to come close. It covers the same ground as Linklater's (imo) masterpiece, just with a longer time in between the main characters meeting, for feelings to stew that little bit longer for added flavour. So, throwing all comparisons between the two out the window, I thought Blue Jay was rather wonderful. The Duplass Bros' mumblecore stylings seem to be maturing by the year and this is maybe the most well rounded film they've been directly involved in yet. It would be easy for Mark Duplass' character to fall into that old Apatow archetype of a manchild loser who clearly doesn't deserve his romantic interest's attention, but hey, she can't help but fall for him anyway!! Yet Duplass never feels truly pitiable, there's a strength behind the outer layer of his unemployment and constant crying that I can't quite identify but allowed to me relate to him pretty hard at points.

However, I'm not quite decided whether Duplass was miscast or not. We all know he can deliver mumblecore small talk, we know he can do comedy, but he really seems to struggle when it comes to the major scenes of dramatic tension, particularly a certain revelation around ten minutes from the end, though the complete failure of that scene is only partly due to his performance; it's a shitty, melodramatic moment in a movie that otherwise does an excellent job of keeping things low key and natural. Meanwhile Paulson, who I thought was fantastic in semi-thankless roles in both 12 Years a Slave and Carol, is simply great here. The mix of charm, world weariness and excitement Paulson brings is perfect and she carries the film whenever Duplass and the script can't. Off the top of my head, I'm struggling to think of a single performance I've seen this year that I've been more impressed by, she's THAT good. After the very unfortunate climactic scene, the final few minutes actually make a rather impressive recovery and the film ends on a nice note, so I don't think the climax actually did a huge amount of damage and I suppose at least it stopped the film just withering out.

The Duplass brothers excite me because they've used their rather specific mode of storytelling to create quite a diverse swath of movies. Blue Jay and, for example, Creep, are such different properties and yet they still feel as if they could be easily tied together and not just because Mark stars in both. I hope they continue to grow in ambition, differentiate themselves from the rest of the mumblecore crowd (for the love of god Joe Swanberg, stop making us look at your penis) and I can't wait to see what they've got in store for the other three films in their Netflix deal (Sandler as always can eat my shit).