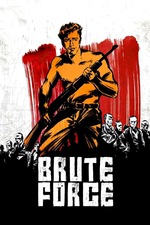 There's a lot to love here. The performances are excellent and Lancaster already seems ready for stardom in his second role. You get some idea of Dassin as film-maker with how the shots are composed and some of the close-ups. It's interesting that a prison break film is kind of the inverse of a heist film, but you don't get much of a preview of Rififi or Topkapi in the actual break. I think you do see it in the organized fight/hit in the machine shop. Men quietly orchestrating a job that unfolds before the viewer.

Sadly, I think the flashbacks and the philosophizing between the good Doctor and various prison officials bog things down. The moralizing discussions are kind of par for the course in crime films of the time. However, Hume Cronyn's Cpt. Munsey is such a nasty guy(another stand out performance) that we don't need the awkward backstories to be able to root for the prisoners.