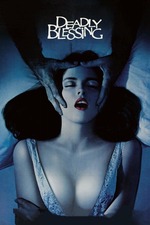 An early offering from good old Wes Craven. He directed this sometime between The Hills Have Eyes and Swamp Thing, so that might be the reason it fell into obscurity or maybe it's because it also received horrid reviews. No matter, I thought this was GREAT.

The lead in the film is none other then Athena from Battlestar Galactica, Maren Jensen. I know that has no barring on anything but I loved her on that series and she's only been in a couple of TV series and one or two films before retiring from acting. In fact this is her last film and she's actually quite good in it.

She plays Martha Schmidt alongside her husband John played by Douglas Barr. Barr was a little distracting as his voice sounds eerily like a young Bruce Campbell. Their farm is next door to a community of Hittites, who "make the Amish look like swingers" and a perfect set up to make for very uncomfortable surroundings.

If that wasn't enough Jim used to be a Hittite, but got banished when he married an outsider, or something along those lines. Let's just say he doesn't get invited to any family functions, which is awkward considering he lives right next door.

If tensions weren't already high enough you just throw in a suspicious death along with hints of possible supernatural shenanigans and you got yourself a horror movie. To make it all even more fun Craven brought along Michael Berryman from The Hills Have Eyes as one of the Hittites. His favorite pass time is to yell "INCUBUS!" at any non-Hittite women he encounters.

The fun with the Hittites doesn't stop there though as their religious zealot leader is played by Ernest Borgnine at his scene-chewing best. He was nominated for a Razzie for his great work here, which is harsh because he's damn entertaining.

The Hardcore Amish aren't the only ones with name recognition though as Martha does have a few friends that come visit her at the farm, one of which is 22 year old Sharon Stone who gets a live spider dropped into her mouth for her troubles.

Craven shows here that he was getting ready for bigger and better things. He mixes this modest film with a combination of psychological and supernatural horror that keeps you guessing in regards to what is really going on. He even tests out a scene he would later reuse in A Nightmare on Elm Street.

It's really a nice little forgotten gem of a film if you give it a chance.