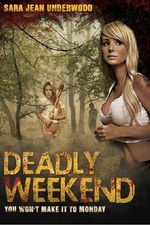 Back in the day I loved G4 Television. It was geared towards tech, video games, movies, pop culture, ect... with shows like X-Play, Code Monkeys and Electronic Playground. One show I'd watch almost on a daily basis though was Attack of the Show! as it was on just in time when I got off work for me to sit down and have supper with.

The period I was watching it, it was hosted by Kevin Pereira and Olivia Munn (Psylocke!) and dabbled in a bit of everything that G4 covered with several "correspondents" like Jessica Chobot, Chris Gore and one Sara Underwood which brings me to this movie.

All that has nothing to do with the movie, but I have two reasons for bringing all of that up:

#1 - I would rather reminisce about watching Attack of the Show! then talk about this movie.

#2 - I feel shame in having watched this and felt like I needed to give some background for the reason it happened.

It stars Sara Jean Underwood from AOTS and a bunch of other people I've never seen before. Think of any aspect of film making and it's done horribly here. Writing, acting, directing, production... I bet the catering even sucked. It's barely a film.

Underwood spends the entire film in a tiny pair of shorts and what has to be a child's tank top. There's a scene where she is tied up and wiggling on the ground for inordinate amount of time and I finally felt like a dirty pervert watching a fetish video making me question the decisions I've made in life that lead me to this moment. The fact that the film has the same production values as fetish videos helped in that feeling.

Oh.. and they changed the name of the movie from Zellwood to Deadly Weekend, because I'm guessing Deadly Weekend sounds much more generic and gives you a better idea that you're about to watch complete garbage.