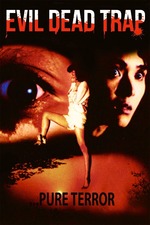 This might be the first time I've also watched a Japanese horror film where I was conscious of it being heavily influenced by western and European films right in the middle of viewing it. He borrows more then just the title of the film from Sam Raimi, gives Lucio Fulci a run for his money when it comes to gory scenes involving eyeballs and has probably seen a few David Cronenberg films in his time.

It sounds like a horrible mishmash of someone attempting a greatest hits of other directors, but the film is batshit crazy enough that my sick twisted mind enjoyed it. The kills alone are insane with the third act somehow managing to go into expected and unexpected territory at the same time. There is 4 stars worth of entertainment here if you are a sick and twisted individual.