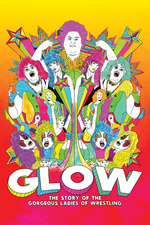 GLOW: The Story of the Gorgeous Ladies of…

Can you believe this stuff?
-Phil Donahue

During the first golden age of professional wrestling there was the Gorgeous Ladies of Wrestling, a show that embraced everything that was 80s and tried to fit in it the mold of women's wrestling. Most wrestling fans from today will probably recognize no one here except perhaps Lisa Mary Moretti who went on to wrestle in the WWE under the stage name of Ivory.

You get a history of G.L.O.W. through present interviews from it's former stars. Surprisingly most of them simply used G.L.O.W. to springboard into other careers as the majority of the talents seem like well adjusted individuals with happy lives. You can't say the same for a lot of the male wrestling stars of the 80s unfortunately.

For the most part it's standard fair seeing the outrageous characters and their history, but the doc does take a turn into something a bit deeper later on which I didn't expect. Pro wrestling fans in general should love this.

Mickey's Once Upon a Christmas