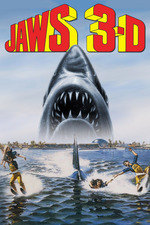 White sharks are dangerous. I know 'em. My father, my brother, myself. They're murderers.
-Mike Brody

Roy Scheider was gleeful with joy that Universal Studios had no means to force him in doing this film like they had previously done for Jaws 2. Just to be sure however, Scheider purposely signed on for Blue Thunder so his schedule wouldn't permit him to be in the film either. He knew that a half-assed film about a super helicopter would be better then Jaws Goes to SeaWorld, unfortunately the execs at Universal didn't feel the same way.

Joe Alves was the production designer on the two previous films and second unit director on the last one. Here he gets a shot at the director's chair for the simple fact that no one else in Hollywood wanted to touch it, especially after seeing the script. Unfortunately Alves was clearly not ready to direct a feature film and would end up never directing one again.

Even if you can get passed the fact that apparently a 35 foot shark has been rummaging around the theme park for days without anyone noticing, the film manages to get dumber as time goes by. This is the film however where I learned that a shark can apparently still kill and eat other people with a full grown man wearing a scuba tank stuck halfway down it's throat. The most amazing thing out of all this is that this wasn't the worst Jaws film they could make.

The Devil Rides Out