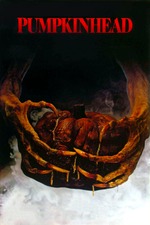 That old woman scares the piss out of me.
-Bunt

Watching Pumpkinhead you realize what a shame it is that we didn’t get more horror films directed by Stan Winston. Admittedly if I ever watch A Gnome Named Gnorm that opinion could change, but most of the horror directors I consider icons and legends did not start out with debut films that are this well made.

It’s his debut film but because of Winston’s experience (like no other) in special effects he’s able to stretch that $3.5 million budget like no other debut director could have. I can’t help wonder if the film’s distribution hadn’t been a complete cluster fuck because of De Laurentiis Entertainment Group’s bankruptcy if the film wouldn’t have been well received upon it’s original release and changed Winston’s course as a director. Still though his career wasn’t exactly halted by the film’s poor box office, just maybe his directing career.

Inspired by a poem written by Ed Justin, which is used in the film, the story is about vengeance. One of the things that I love about this movie, other than the original creature design, is the ambiguous nature of most of the characters. Most horror films characters are black and white. Bad or good. Ect. Here the central characters are good people who make bad decisions that would seem justifiable to some people. Lance Henriksen is perfect for this type of role. It sets the chaos in motion.

The last time I logged this back in 2016 I wrote about my concerns of using CGI in the remake that was in the works. Four years later the project isn’t any farther along as far as I can tell. If it ever gets done I think a combination of practical effects augmented by CGI could make Pumpkinhead amazing. You just need to look at what Guillermo del Toro pulls off in his films. Of course, thinking that a Pumpkinhead remake would be made with the same quality as a del Toro film is laughable, I know. One can dream though. Probably get a few more high-profile Halloween remakes/reboots before that ever happens.

It’s not just that it’s a cool creature design, it’s also a fantastic horror story with a great central theme.

Also, worth noting that this is Mushroom’s second and final film after starring Gremlins. He performed all his own stunts.