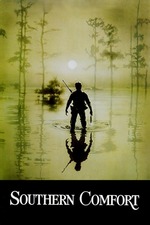 I got news for you. He's nuts. I mean really fuckin' nuts.
-Hardin

Walter Hill insists that this is NOT a metaphor for the Vietnam War. He doesn’t want to hear about it either. You gotta love Hill. I just picture people going up to him saying they admire his great allegory on the war and him telling them to fuck off that he did no such thing.

Admittedly it’s a bit shocking that it’s not meant to comment on the war because it works perfectly but I’ll trust Hill knows what he’s talking about.

I didn’t know about this film before and now I think it’s easily one of Hill’s best as a director. If I was to pick my favorite films from him the top spot would be between this, The Warriors and The Long Riders. A theme to the ones I like being obvious now.

A great cast filling out the group of soldiers with Keith Carradine and Powers Boothe doing a fantastic job in the lead roles as characters with opposing viewpoints but simultaneously being on the same side. It’s an interesting dynamic they have going on there.

It’s brutal and full of dread. Fun for the whole family.