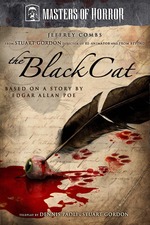 I have little sense of the world around me. Such is my genius.
- Edgar Allan Poe

Now you're talking! A Masters of Horror directed by Stuart Gordon and starring Jeffery Combs. This isn't Gordon's first entry in the series, but it's the first one with Combs in it. To me this is the equivalent of having Kurt Russell star in the John Carpenter entries of the series.

Here Combs plays Edgar Allan Poe and he's fantastic! I sometimes forgot it was him. It's a fictionalized take on Poe's short story The Black Cat that is interwoven into Poe's life. I've seen a film based on the same story before, the 1931 Black Cat starring horror legends Boris Karloff and Bela Lugosi. That one only took Poe's name and title of the story. Seriously the film has nothing to do with the original story other then the presence of a black cat.

This is a great take on it though. It's dark, macabre and gory. Best of all though it's Combs being directed by Stuart Gordon again.