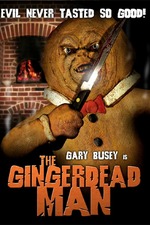 It sure ain't the Pillsbury fucking doughboy.
-Millard

I won't lie. It's with great shame that I will admit that I chuckled at seeing a gingerbread man curse out a rat, saying it was going to kick it's ass and to fuck off all in Gary Busey's voice. That was probably the highlight of the film for me.

This isn't just a Full Moon Productions film, but it's directed by Charles Band himself! I'm guessing it's because the story was so important he couldn't trust any other director to bring it to fruition or... maybe just no one else wanted to touch it's shitty script. Whichever.

It's running time of 70 minutes is actually padded with over 10 minutes of credits, which is hard to believe considering it's miniscule cast and the fact that almost the entirety of the film takes place inside a bakery. A bakery that the characters are either too stupid to escape from or just unwilling to.