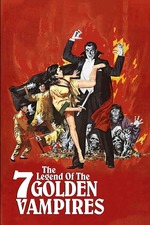 What you must understand is that they are already dead. They are cursed creatures craving human blood for their very existence.
-Professor Van Helsing

After taking Dracula to the present day 1970s for two films we go back to the 1800s for Hammer Films last outing with the Count, but this time it really would be unlike any of their Dracula films before, not the least of which is the fact that it's the first without Christopher Lee as the Count.

This go around they go full on exploitation Kung-Fu flick while co-producing the film with non other then Shaw Bros Studios. Experienced horror director Roy Ward Baker is the only credited director on the flick, but legendary Shaw Bros director Chang Cheh was also co-directing, and it shows, certainly in the fight scenes.

Now you have Dracula, Kung Fu vampires and unnecessary female nudity with Peter Cushing and David Chiang in the middle of it all. It is as goofy as it sounds no doubt, but damn is it ever fun. The most amazing thing is Cushing's performance is as good here as any other Hammer Film he's done and the film is all the better for it.