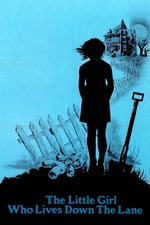 The Little Girl Who Lives Down the Lane

As for tea, Darjeeling or Earl Grey?
-Rynn

An odd little gem of a film that I had never heard of before. A Canadian/France co-production directed by Nicolas Gessner from a script by Laird Koenig adapting his own book. Elements of mystery, horror and drama blend together for this story of a 13 year old girl and her poet father that no one seems to have met.

The mystery and suspense is simply built by keeping information from the viewer while a 13 year old girl named Rynn, played by Jodie Foster, seems to be a master of word play whenever anyone asks the whereabouts of her father. It's a great performance like most of her early outings, but it really shines in tense scenes with Martin Sheen who plays possibly the creepiest character in the history of his career in Frank Hallet.

The film works on more then one level. You have the mystery of whether or not Rynn's parents are in fact dead, if she had anything to do with it if they are and the immediate danger she will be in if in fact she is living alone and Frank Hallet figures that out. It's a charming, suspenseful and in some instances an uncomfortable watch.