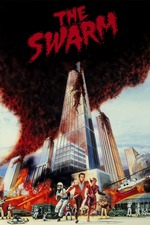 By tomorrow there will be no more Africans... at least not in the Houston sector.
-General Thalius Slater

Wait... what the fuck did that general just say?

Disaster b-movie featuring killer bees who's most shocking aspect is how the hell did they get Academy Award winners to be in this dreck. It does feature some ridiculous moments like bees managing to derail a train and the army thinking it's a great idea to kill them in enclosed spaces using flame throwers.

Now if the film was wall to wall crazy moments like that this would be great, but they are few and far between with the majority of the time being incredibly boring with literally nothing happening preventing it from the coveted "so bad it's good" moniker. The craziest part about this film was just when I was getting used to inexplicably seeing Michael Caine slumming it in a poor man's disaster movie, out of nowhere shows up Henry Fonda.