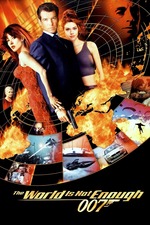 The World Is Not Enough

Part of:
Dr. No-vember or: How I Learned to Stop Worrying and Love the Bond Films

The film is mixed with moments of brilliance and idiocy. It has one of the best pre-title Bond sequences in franchise history which includes an attack on the MI6 headquarters itself, but on the other side of things it also includes an overkill scenario where Bond is attacked by a dozen flying snowmobiles. For every great moment there seems to be a cheesy one around the corner trying to erase the memory of what just happened.

The plot however is one of it's strongest aspects. The villain's end goal is comparable to other Bond films, but what is original is the "who" and the "why". The dynamic between the characters of Bond, M, Elektra King and Renard is on a personal and emotional level seldom seen in the 007 franchise. This creates some actual great unique situations and altercations for characters we've known for years. Unfortunately it's not taken as far as it could have and ends up with a lot of wasted potential.

Pierce Brosnan gives possibly his best performance as James Bond here as he is tested in scenes that are all over the spectrum from witty to the darker side of the character. Robert Carlyle makes a good villain, but you can't help but expect a bit more from him. Sophie Marceau is the personification of what every Bond Girl should strive for; sophisticated, exotic and gorgeous. Judi Dench shows a vulnerable side to M while not seeming any less of an authority figure. Denise Richards is like a black hole that sucks all the entertainment out of the film every time she's on screen or opens her mouth. Her casting in this film might be the most ridiculous thing to happen in the franchise's history. She's playing a nuclear physicist while having the looks and acting skills of a porn star.

This would also mark the 17th and last Bond Film with Desmond Llewelyn in the role of Q. He shares a somewhat rare sentimental moment with Bond that is actually nicely pulled off while he mentions his retirement. Sadly Llewelyn was in a fatal car accident a month after the release of this film.

This could have easily ended up as great, if not greater then GoldenEye with a few minor adjustments in regards to a couple of goofy action sequences and one major recasting of a certain nuclear physicist. I rate it a bit higher then the last film however as the few great moments it has are better then the best moments in Tomorrow Never Dies.