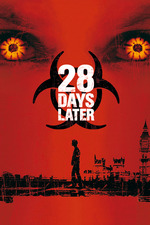 SYNOPSIS: Four weeks after a mysterious, incurable virus spreads throughout the UK, a handful of survivors try to find sanctuary.
- Source: IMDb

Having made his name with dark, grotesque comedies or dramas like Shallow Grave and Trainspotting, Danny Boyle didn't seem like an obvious choice for directing a zombie movie. But then again, appearances can be deceiving, and as it turns out, Boyle's gritty, low-budget take on the genre is one of the best horror films to have been produced during the 2000s.

TRIVIA: The film was shot almost entirely in sequence; only pickups and a few reshoots were shot out of sequence.

In fact, the Z-word (as it's lovingly referred to in the hilarious Shaun of the Dead) is never used in the film, perhaps because the director prefers not to call his work a "zombie film". Instead, the undead are called "infected", as the whole story begins with a raid in a lab, where a very powerful virus is accidentally released. At this point, the scene fades to black, followed by the caption "28 days later..." (hence the title). And that's when the movie really kicks in: an average Brit named Jim (Cillian Murphy) wakes up in a deserted hospital and goes out in the street to look for help, only to find the whole of London completely abandoned (a truly unsettling sequence), safe for the infected, constantly running (maybe that's where Zack Snyder came up with the idea of fast zombies in the Dawn of the Dead remake) in search of human flesh. Having been saved by the disillusioned (and very tough) Selena (Naomie Harris), Jim decides to join her and her allies in an attempt to find a place where a peaceful life is still plausible.

TRIVIA: Danny Boyle and Naomie Harris developed a back-story to explain Selena's hard-nosed, ruthlessly pragmatic outlook. Apparently, Selena was forced to kill her infected mother and father to save her baby brother, only to discover that her brother was also infected.

At this point, the second part of the movie begins: Jim, Selena, and the others run into a bunch of soldiers (led by Christopher Eccleston), who live completely isolated in a military zone while waiting for the situation to improve. At first, the survivors have nothing against staying there. Soon enough, though, they will realize that maybe it isn't the infected they should fear the most, as a dramatic battle for everyone's life starts to take shape...

TRIVIA: Athletes were cast as the Infected because of how important physicality is to them. Danny Boyle felt that since athletes can do things other people can't, they would be interesting when translated into the movements of the Infected.

One of the main strengths of 28 Days Later... is Boyle's unpretentious, realistic approach: the hand-held cameras add to the eerie mood, particularly in the film's first half, giving us an otherworldly, but at the same time believable portrait of a dystopian, gloomy England. Also important is the attention to character: where most movies focus on the action scenes, the Trainspotting director is more interested in establishing plausible, affecting relationships between the people he's observing, and in that he is helped by a committed cast, especially Murphy and Harris (plus Brendan Gleeson in a brief, but exhilarating appearance). It is in fact largely thanks to the actors that Boyle manages to get away with a fairly conventional third act (heavily inspired by George Romero's Day of the Dead) and villains that would look stereotyped if played by lesser performers.

TRIVIA: Alex Garland and Danny Boyle did a great deal of research into social unrest, drawing ideas from things that had happened in Rwanda and Sierra Leone (such as the piling of bodies inside churches), but drew the line at using any actual footage from such incidents in the opening montage. All footage featuring dead bodies/desecration of bodies was faked.

Knock on wood that Hollywood never decides to remake this dark zombie epic, and for 18 years now that has held true. Let's hope it continues.

Overall it does have a few flaws, mainly due to budget constraints, but 28 Days Later... is nonetheless a compelling film, and arguably the best British contribution to the horror genre since An American Werewolf in London tore through the British airwaves in 1981. This is the movie that the films that comprise the Resident Evil franchise wish they could be. Thank you, Danny Boyle.

How would you say this film compares with its American contemporaries like Resident Evil, The 'Dead' films or any other American zombie film?

What was your favorite / least favorite aspect of it?

Who was your favorite character?