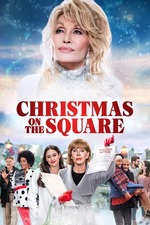 Dolly Parton's Christmas on the Square

Dolly Parton's Christmas on the Square finally answers the age old question of what Lars von Trier's The Grinch who Stole Christmas would look like.

I've seen a lot of throwbacks recently, but this is the first time I've seen "Late-80s NBC All-Star Christmas Musical" as an aspirational goal. I almost wish this was on VHS. Hell, I kept expecting commercial breaks to pop in with warm an fuzzy wintery pitches from K-Mart and McDonalds. And in the McDonalds one you have Grimace dressed up as Santa and twelve Chicken McNuggets playing the reindeer and you'll ask yourself "why are there twelve McNugdgets when there's only eight reindeer" and it's like FUCK YOU JUST BUY OUR FUCKING HOLIDAY NUGGETS WITH THE JINGLE SAUCE YOU UNGRATEFUL CHILD oh and hey the toy this week is a Transformer that's a Toyota hatchback that then becomes a barf-colored Christmas tree and your parents still won't take you no matter how cool Transformers are OH THANKS MOM

I think we can all agree that that is the true encapsulation of the holiday spirit, and this movie indeed taps into that.

Christmas on the Square is shot with extreme "high school cast on closing night" energy. You keep waiting for the studio audience to applaud as each set piece rushes by in a flurry of madness and confusion. Each song in this film is terrible-- terrible! And I don't think I've ever seen a musical number assembled entirely from coverage before!

I'm not going to ruin Christmas on the Square for you but will say that, yes, Dolly Parton does impregnate a pastor's wife at one point. It may not be my favorite movie I've seen this year, but it has to be the nuttiest.