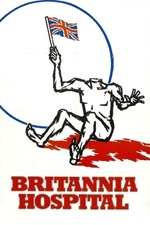 It’s another beautiful day in England. Political unrest has lead to explosions in London. The wounded are rushed to Britannia Hospital, one of the oldest and proudest medical centres in the city. Trouble is, unions have made running the hospital nearly impossible. The wealthy private patients (including an African tyrant they’re harbouring) are given preferred treatments over the poor, a gang of protesters prepare to storm the hospital gates, and their own Dr. Ritter runs amok conducting his own mad experiments. All this on the day of The Queen Mum’s visit.

Lindsay Anderson caps off the “Mick Travis” trilogy with an absolutely bleak vision of the 1980s (a criticisms of the far left and the far right that no one liked 🤷‍♂️), and perhaps, an apocalyptic warning.

This film, after an elaborate opening that sets up a web of characters and motivations, eventually settles on the handful of hospital adminstrators who attempt to bandaid over one problem after another. Anderson keeps them together as a comedy troupe, bouncing off each other as their precious hospital falls apart. They’ll do anything to keep up appearances in order to receive their precious HRH.

Anderson keeps his film in wide shots, using the groups of ensemble characters he’s established to physically react to locations they’re in, a little like the films of Robert Altman mixed with Jacques Tati. His cross cutting between the various plots contrasts these different groups within Britain against each other, and just like he did with “If....” the hospital becomes a microcosm for England as a whole. He particularly finds joy in contrasting Old Britain, represented by the administrators and the old wing of the hospital, with Britain of the Future, represented by Dr. Flynn and the science fiction imagery that surrounds him.

The investment Anderson made setting up this complex narrative pays off in spades as the film races towards its climax and society breaks down. Britain folds in on itself, as its systems of classism, racism, imperialism and socialism clash with one another. The chaos is often hilarious.

What fascinates me is how much Anderson’s brand of satire was embraced with his ‘60s output, yet rejected in the ‘80s, despite him being dead-on with both. I think it says more about the times and the tolerance for criticism than Britannia Hospital being a lesser film.

Its final moments, which evoked such a range of opinions during its release, is masterful, and is ever more striking today. As the monstrosity Dr. Flynn gives birth to utters its first words to the entirety of the country, is Britain finally facing God? Are they greeting the country’s next evolution? Will this creature bring Britain’s salvation, or its reckoning?

After uttering the most famous rumination on the human condition (that speaks to our best and our worst) Shakespeare ever wrote, the film’s final cut to black remains one of the most lingering mysteries in modern cinema.

What a piece of work is Britain?