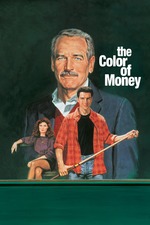 It’s so fucking painful to make a living doing a thing that you love. As Eddie keeps trying to tell — and show — Vince, it’s always easier to make a buck when you can keep your heart at arm’s length.

When I first watched THE COLOR OF MONEY as a teenager and a budding Scorsese obsessive, I’d assumed that such was the exact philosophy that my boy Marty had brought into the making of the movie — that it was a mercenary job, and his heart wasn’t really in it. But here’s the thing I realized, after rewatching this one at the behest of two of the Matts in my life (thank you, Matts!), if I may be so bold as to speak on behalf of the greatest American filmmaker: I really don’t think Martin Scorsese is capable of making a movie without putting his whole ass heart into it.

When Scorsese made THE COLOR OF MONEY, he was 43 years old — not quite the young hotshot who blew everybody away with MEAN STREETS, nor the tired old legend having to beg and plead with Lala Kent’s husband for the funds to make a 3 hour religious epic about monk torture. In other words, about equidistant between the two poles of Vince and Eddie. But I also think you can look at him accepting this assignment — a self-described “hired gun,” eager to prove he could make a commercial hit following the box office disaster of KING OF COMEDY, making a sequel to someone else’s movie, with two mega-stars — as an act analogous to Eddie hitting the road with Vince. Here’s a guy who was once *the* guy, and now he’s on “child care.” No wonder Orvis is so surprised to see how the tables have turned.

But despite Eddie’s continued insistence that you leave emotion at the door, and that sometimes you need to lose (or make NEW YORK, NEW YORK) in order to win, he still ends up back at the table himself. And comparably, I think you can feel Scorsese perked up behind the camera here — newly rejuvenated by his indie experience on AFTER HOURS and his newfound collaboration with Michael Ballhaus, their swirling camera capturing the agonies and ecstasies that make these smoky pool halls equal parts torturous yet irresistible. Even the slightly unusual framing of Eddie’s close up while in bed with Janelle — the center of Newman’s face anchoring the bottom of the frame as Janelle bobs around out of focus, as Eddie’s mind reels with possibility presented by Vincent’s talent — communicates a simpatico sensibility with this world of would-be winners. You can just as well imagine Forest Whitaker’s hot shot hustler, who so thoroughly humiliates Eddie during our hero's return to the table, as an analog for Adrian Lyne, Tony Scott, or whichever other flashy stylist du jour Scorsese saw as getting the studio attention that should've been coming his way. I'd bet anything that both of those guys were in contention to direct this movie, too.

And fittingly, the ending communicates a sort of conflicted resignation to the hustle itself — uneasily coupling a love of the game ("I'm back"!) and a disgust for the game around the game (Vince's payoff), in keeping with career philosophy that's seen Scorsese reject the franchise game of the major studios, instead taking money from streamers and wheelers like Randall Emmett, in the interest of making movies on his own terms.

In any event, this is a long way of communicating that the guy is incapable of making an impersonal movie, considering that his $175 million dollar 3D kids book adaptation was an extended ode to the art of film preservation… but it’s a mistake to assume this movie is any exception. And much like his other movies that fall more in the realm of genre play than overt personal expression (THE DEPARTED, SHUTTER ISLAND, CAPE FEAR), it’s just really fucking watchable too.

tldr: This movie is KIKI’S DELIVERY SERVICE for scumbags and I love it.