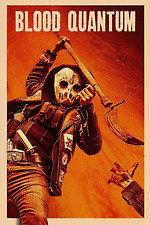 Sort of fucking baffled as to why this film hasn’t been more widely talked about and celebrated. In all actuality it’s probably the best zombie film since Romero’s Day of the Dead. It has everything I want from a new horror movie, yet so rarely get.

Tremendous performances all around for starters. In a better world, Michael Greyeyes would be a more well known movie star. Forrest Goodluck and Kiowa Gordon are terrific as half brothers, doing a marvelous job bringing out the love between them and the tension that arises when one sibling gets a vastly different experience of a parent than the other.

Brandon Oakes is a great presence playing a character archetype I always love in movies, the strong, dependable friend to the lead. And it was awesome to see Gary Farmer turning in interesting work as a weathered old soul, corrupted by his disgust. Everyone is really damn good in this is the bottom line.

Unlike say, the didactic, maudlin posturing of The Walking Dead, Blood Quantum has important things to say about the generally as yet unexplored themes it’s concerned with. This film muddies the waters on issues of tribalism, indigenous persons marginalization and xenophobia, coming up with fascinating juxtapositions with the modern world. There was never a moment in this I wasn’t completely engaged on an intellectual and emotional level.

The film making and score are exceptionally strong. You can tell right out of the gate by the eerie place setting and anxiety inducing build up to the zombie apocalypse that you’re in the hands of a confident, inspired film maker. The setting is both narratively and visually compelling, with top notch production design slathering it all in lived in authenticity. Blood Quantum is about a world shunned by Hollywood long before it becomes a zombie movie. That conscious decision sets it apart from the hordes of counterparts with vastly less to say about how and why the world falls apart through infection and distrust.

And can we talk about the gore? Blood Quantum is visceral and creative in the ways it utilizes violence in a fashion I’ve been wishing horror would return to for ages. I was wincing at shit and had my jaw on the floor by unexpectedly bizarre kills left and right. This is a tough film that doesn’t shy away from anything, yet never tips over into parodic Grand Guignol. The film has a vise like grip on tone when it comes to the drama and sociocultural subtext, so it’s no surprise it maintains it when it comes to the horror elements.

I don’t want to get into plot specifics or spoil any details because I am pleading with people to give this film a chance, especially if you have Shudder. This is the best original content I’ve seen on there by a country mile. I might be overrating it a half star or so, and admittedly you will see a lot of sub genre tropes you’ve seen before. But it’s the manner this film goes through its paces and the unique setting and character focus that makes it such a refreshing, meaningful experience.