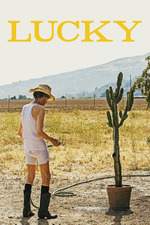 He wasn’t leaving me, he was just going off some place else, to do something he thought was important.

A film is often largely the product of a director. But a film can be a studio, a producer, a screenplay, a great source material. Very rarely is a film, an actor. Lucky is a eulogistic, pre-mortem-post-mortem sort of film that pays homage to the incomparable character actor Harry Dean Stanton, in the most knowing, understanding of ways.

I was always going to be affected by this film, it’s the last dance of my favourite actor of all time, a star of Paris Texas, and Alien. My top two favourite ever films. Harry Dean Stanton always carried a face that felt as if he was years ahead of his age, and withered by some indistinct past experiences. His demeanour always suggested that he was anything other than lucky. And that’s how his character, Lucky, comes across in this film, the title of the film and of the man is shaded with irony. Though each of these men are lucky, truly, and I like to think that this film is Harry Dean Stanton acknowledging that, as he says goodbye with a wink and a nod.

Lucky is a directorial debut by John Carroll Lynch, another of the great character actors, which symbolises an almost passing of the torch, as one pays homage to another. And paying homage to Harry Dean Stanton is something that comes up often in this film. The harmonica as he walks alone through the desert, reminiscent of Paris, Texas. The supporting role of David Lynch, one of the most important figures in Stanton’s career as his director in Twin Peaks, Inland Empire, and The Straight Story. And of course the reunion with his fellow Nostromo crew member from Alien, Tom Skerritt, which painted a fat smile on my face that I couldn’t wipe off despite how often the film tried.

The scene that really brought that ridiculous grin, though, was the mariachi band scene at the fiesta. God, what a beautiful, joyous moment that was, and the most spectacular way to end Harry Dean Stanton’s momentous career, and life. His final glance, a knowing, accepting glance, right in to my eyes should have brought me right back down in to floods of tears, something that I fully expected from this film, but it didn’t. It was hopeful, an acceptance from an atheist not to say that there is life beyond death, but that the life that he lead before that was as much as he could have wished for. It was as much as any of us could have wished for, Harry. May he rest in peace.