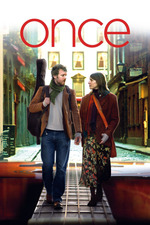 Here I go, gonna be that guy that compares literally every modern musical I watch from this point on to La La Land. Once is the antithesis of La La Land in so many ways, despite the similarities. John Carney's feature debut is essentially a homemade movie, shot entirely (until the last shot) on a couple of handheld cameras, with unknown actors, set in the director's mates houses. It's this that makes it so intimate, so personal and human. The characters don't have lofty hollywood ambitions, they simply want to do what they love, refusing to give up. This hope and this shared ambition connects the two main characters, characters who don't particularly share huge romantic moments. But still it's one of the most real love stories I've seen in a long time. The scene in the music shop is bloody incredible. I'd reccommend this to literally everyone.

I already want to watch it again.